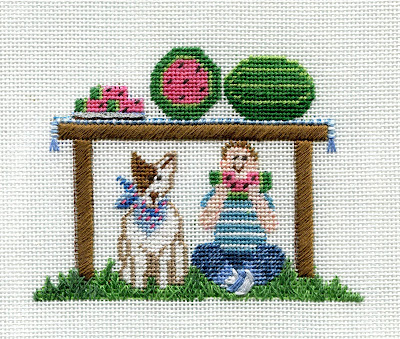 This is a small Rebecca Wood canvas I started stitching last summer, but set it down at some point, and forgot about it.

This year, I remembered it, pulled it out of my stash and decided to get it finished for this Fourth of July.

It's actually part of a set of characters that make up an Independence Day collection -- don't know if it's still available, but it's really, really cute and I just fell in love with this little boy and his dog in particular....

And I certainly had fun stitching him up - nothing fancy, mostly basketweave stitch. I decided NOT to put in a background, as you can see. I'm going to just frame it in a simple silver frame, then enjoy looking at it the rest of the summer!

Check out many more of Rebecca Wood's wonderful canvases at www.RebeccaWoodDesigns.com
Posted by Laura at 10:52 AM 7 comments: 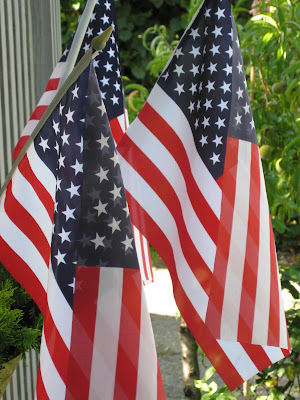 As I've walked around Healdsburg this week, I've taken some pictures of how some houses are decorated for the upcoming Fourth of July weekend, and thought you'd enjoy seeing them..... 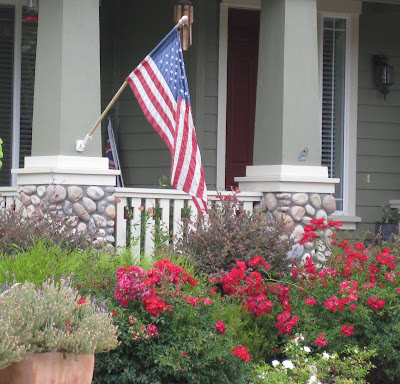 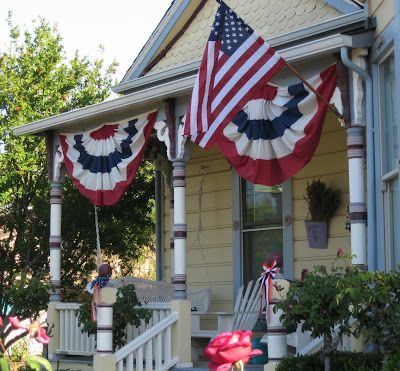 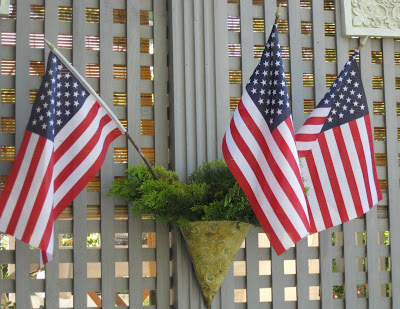 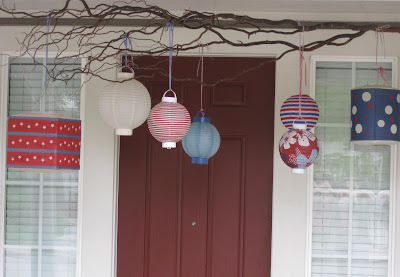 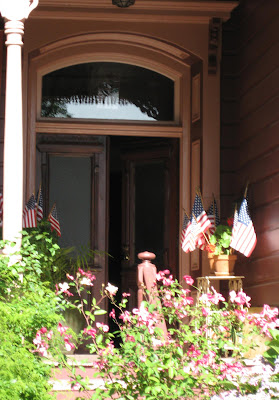 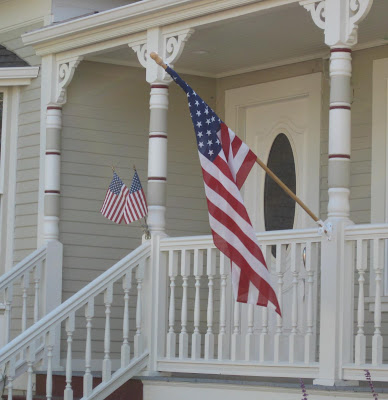 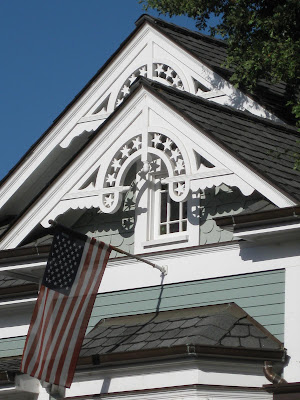 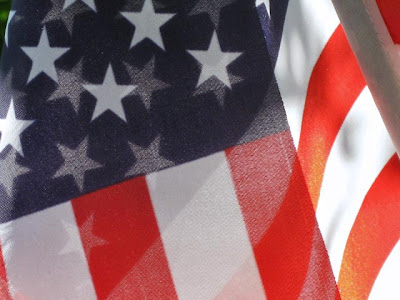 I hope wherever you are, you have a Grand and Glorious Independence Day!
Posted by Laura at 9:30 AM 2 comments:

Here's a little seasonal color to get you in the mood for the upcoming Fourth of July weekend.....

Here's the first red, white and blue quilt I designed, called STARS & BARS (and yeah, it has a bit of gold in it, too). Let's face it, these stars are just plain fun to stitch in ANY color combination: 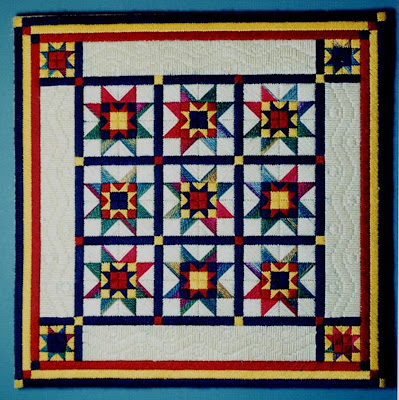 Then a few years later, I came up with another red, white and blue quilt I called STAR SPANGLED QUILT, which has a good bit of gold - but it's metallic this time: 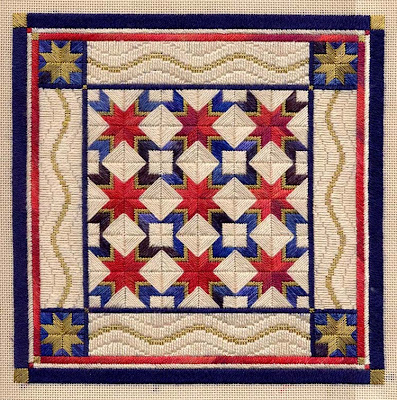 This is LIBERTY STAR, one of my all-time favorites, with a quilty version of bunting.I think this is a great design because not only does it have lots of fun stitch patterns in it, but it also manages to look traditional AND contemporary at the same time: 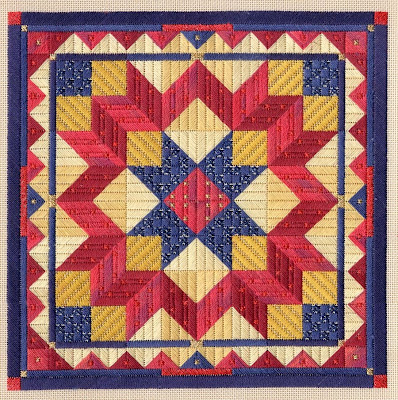 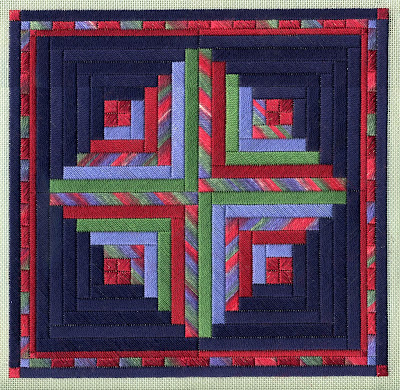 And do you love firework displays? I do. And I wanted to try and create some fireworks - stitchery style - so I designed my INDEPENDENCE DAY: 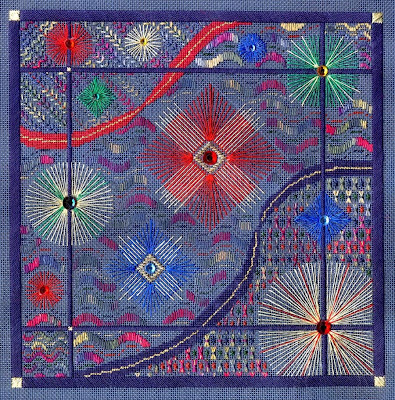 And WOO HOO!...for a real firecracker, sparkler effect, you gotta love this PINWHEEL SPARKLER pattern. It reminds me of kids sitting on the curb, waving pinwheels and flags as they watch a parade pass by. This design just sings out with lots of colors, movement and razz matazz: 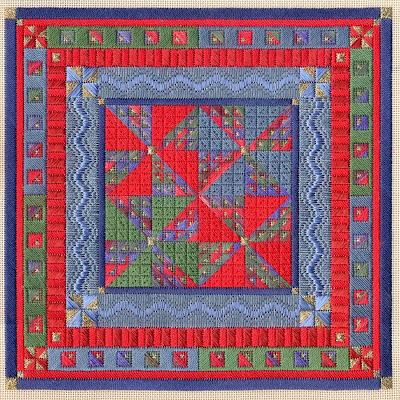 And last, but certainly not least, is my INDEPENDENCE INN, which says it all: 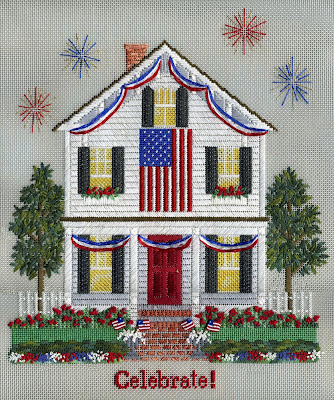 Hope this gets you in the Spirit for stitching - as well as celebrating our freedom and independence!
Posted by Laura at 7:30 AM 1 comment:

Duel in the Sun

Every morning Katie looks out the window hoping to see the squirrels playing on my lawn or up in the trees. She positively quivers if she smells squirrels and nothing will do but I let her out to sniff around. (I always wait until the squirrels are up in the tree, however...) She beelines it to the tree, sniffing furiously and sometimes barking and howling with frustration that the squirrels have eluded her yet again.

Here's the big cedar tree on my front lawn (i.e.: the battleground) with Katie
at its foot, looking up for her nemesis - THE SQUIRREL. 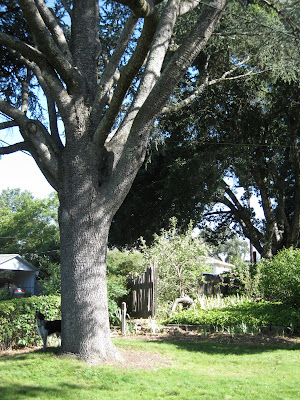 In the background you can see a big oak tree that the squirrels also like to play in, as well as an assortment of other redwood, fir and walnut trees in the neighborhood.

This morning, there was the usual standoff between Squirrel and Katie.
Here's Squirrel, high above and safely watching Katie doing her crazy dog dance around the yard: 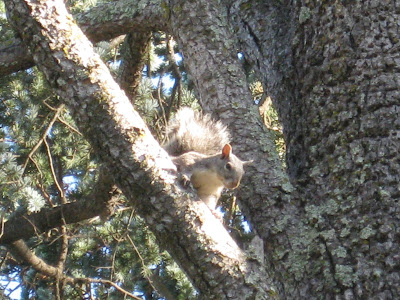 And here's Katie, waiting for Squirrel to make a move, any move.... 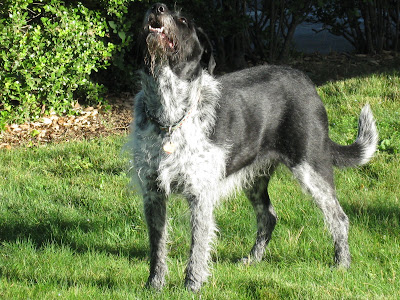 Alas... today, like every other day, Squirrel has wisely scampered away to scold and play another day. But Katie will be waiting and dreaming of squirrels in the meantime..... 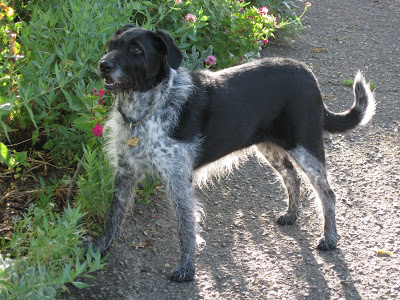