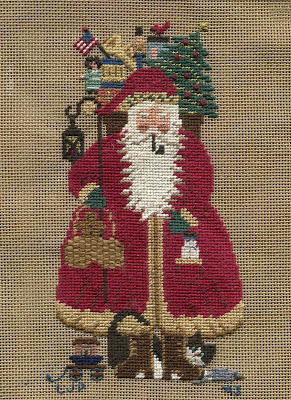 Here's one of my favorite Christmas items I stitched many years ago (1993, to be exact). It's actually a cross-stitch pattern (don't recall the name of it, off hand) but I stitched it in Tent Stitch (or half cross-stitch) on 18 ct canvas. I like stitching things on the "original" brown canvas, because it looks kinda rustic and old-fashioned....

Then I didn't bother to frame the piece. Instead, I made a small and simple banner out of it, so it hangs in a small space (finished size: 6" x 10") and makes me smile each time I look at it (I just love the cat and mouse at Santa's feet - it's such a great, unexpected detail!) 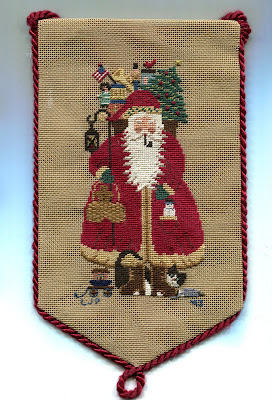 I hope Santa is good to you today, and fills your stocking with lots of sweet surprises.

MERRY CHRISTMAS, EVERYONE!
Posted by Laura at 8:03 AM 1 comment: 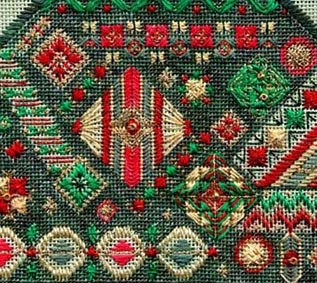 Have you been stitching any ornaments this season? Just one or two, perhaps??
When you think about it, making ornaments is the perfect way to show off your passion for needlepoint. You get the pleasure of stitching up some small treasures (using a deliciously fun assortment of luscious threads, colored canvases and clever designs, naturally); the person who receives the stitched ornament gets to admire your handiwork everytime they look at your gift -- it's a win/win situation for everybody!

And here's a spectacularly clever idea for you to try: I was talking with some stitchers at a guild meeting recently, and one of the stitchers, Zora, was telling me about her ornament projects. She was stitching ornaments from her LARGER projects. In other words, instead of working for months/years on one of those gorgeously complicated patterns with lots and lots of intricate blocks/sections, she decided to extract smaller parts of the overall design and work them up as ornaments. Is that clever or WHAT?!? Thanks for the great idea, Zora!

If you're like lots of us counted canvasworkers who amass lots of large heirloom and master-quality designs, planning to get them all stitched "SOME DAY" in the future, this is a way to start stitching them in bits and pieces right now. It's also a great way to try out color and thread combinations, before tackling the larger pieces. I immediately started thinking about that STARS OF THE MILLENIUM piece I've started (and probably won't finish until the next millenium) or all those Jean Hilton books I have (and hesitate to dive into) .... they have TERRIFIC ornament potential, don't they?

And among my own designs, there are a few that can be easily adapted to ornaments. JEWEL BOX is one of my all-time favorite designs. 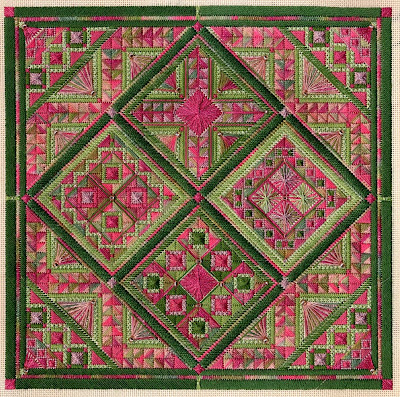 I've often wanted to stitch each of the diamond-shaped boxes as separate ornaments, in a holiday palette of colors.

As my holiday present to you, I've extracted one of the boxes and graphed it as a separate ornament. Please visit the FREE PATTERNS page on my website to print out the graph. You'll have to pick your own favorite colors and threads, cut a piece of canvas and then you're good to go.... 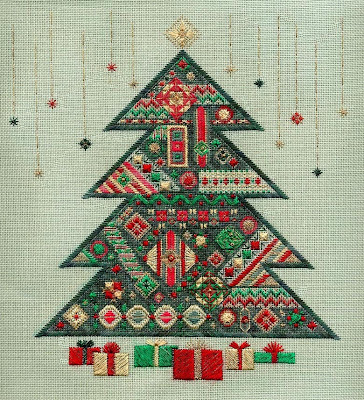 (Hey... there's still PLENTY of time to whip something up, right? Christmas is still one whole day away! - grin.)
Posted by Laura at 7:29 AM 2 comments: 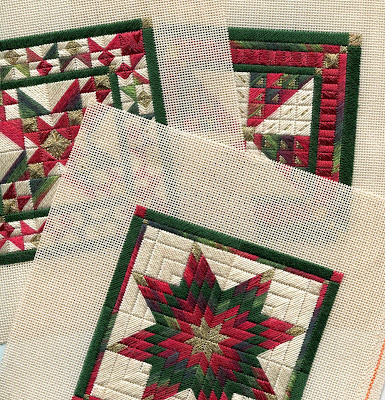 I have a confession to make: I'm a seasonal stitcher.

I like to stitch pastel things in the springtime; lush green designs in the summer months; orange and gold leaves and Halloweeny stuff in the autumn; and lots of festive red and green designs when the holiday season rolls around. Which makes it hard for me as a designer, when I try to get patterns done IN ADVANCE of their proper season. I simply can't get enthused about stitching Christmas stuff in August, or Easter stuff in November. I've tried, but it doesn't work for me.

Which means I'm usually scrambling to finish some seasonal design in time to release it within the proper season. Sometimes I get it done, sometimes I don't. So then I put the unfinished design in the Pile O' Projects and move on to non-seasonal stuff and sigh a big sigh of relief.

I'm telling you this to explain why I DIDN'T get my Christmas ornaments pattern done this year. Earlier, I had the brilliant idea to make smaller ornament designs from my many quilt patterns. It's something I've wanted to do for myself, and thought there would be other stitchers who would like them too.

I rooted through my thread stash and found my favorite Christmas colors and threads to play with: 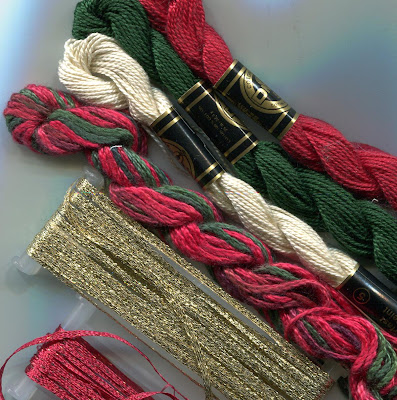 Then I decided on the size of each ornament, cut some canvas, and started stitching. Well, I got a few of them stitched, but not enough...and not in time to release this year.

So, I'll try to do better next year and get my ornaments done in time for the 2010 holiday season.
Posted by Laura at 8:11 AM 5 comments:

A while ago I was telling you how I was in the mood to get some projects finished that were languishing in my "TO DO" pile. One of the designs that had been buried for the longest time was this MAGNOLIA COLLAGE. 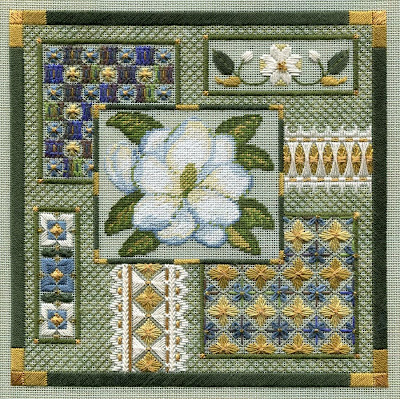 Initially, I thought it was going to be a breeze to stitch this up, but when I started stitching the original patterned squares, I didn't like the way they looked and was stumped as to how exactly to proceed. Frustrated by this design impasse, I set the project aside and went on to other things. Months later, I pulled it out again, ripped out the offending patterns and started fresh. And immediately fell in love with the redesigned stitch patterns - their colors, textures and ease of layering got me so jazzed I continued to whip right through this design. Here are close-ups of the two pattern squares: 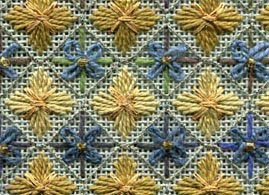 And of course, there are a couple of frothy ribbons to stitch: 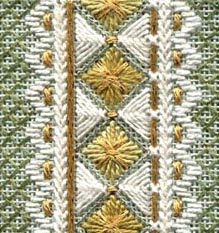 And the centerpiece, the magnolia flower (stitched in DMC floss): 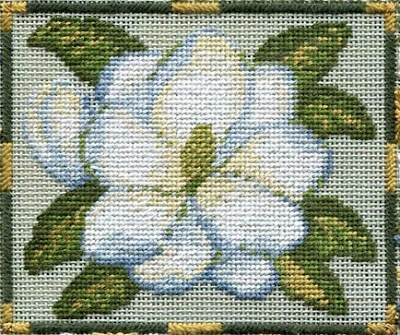 One of my favorite things about this design is the variegated thread I used (Watercolours 153 - "Distant Hills") because it seems a rather unexpected choice. But it has rich blues, greens the color of glossy magnolia leaves, and a surprising twist of apple green...and it resonates perfectly with the old gold metallics I wanted to use for this elegant southern beauty. And the whole palette really does glow against the sagey grey-green canvas (good old Santa Fe green).

Anyway, I'm delighted to have finished this floral collage and suspect it's going to be very popular with stitchers all over the country!

Please visit my website to see more information on this MAGNOLIA COLLAGE or to order this pattern.
Posted by Laura at 7:30 AM 1 comment: 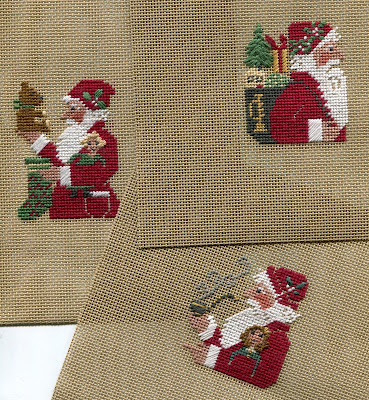 Well, it's that time of year again.... when snowflakes are falling and stitchers are frantically stitching to finish their projects by the holiday deadline.

I've been stitching up a few small Prairie Schooler santas that I'll be giving as gifts (the ones shown at the top).

And then (as time permits) I've been pulling out various Christmas canvases and stitching a bit on each one, to get back into the Christmas Stitching Spirit.

Here's a Santa I'm working just for myself - it's a Pat Thode Santa that I showed you quite a while ago.... It was one of those (many) projects that I stitched just so far then set aside when I got bored with it. I picked it up again last week and decided to push on through to (finally) finish it. In a spurt of energy I added all the finishing touches - the ribbon on the wreath, the pull string and button wheels on the sheep, bells on the boots, etc... and then I decided it needed a different kind of background.

I tried a bit of the vertical lines of snowflakes. Nope, too faint.
I then tried some pale vertical stripes - like wallpaper - but it looked like Santa was in jail. An upscale shabby chic jail, but still, not the look I was going for.

Then, as luck would have it, I was in the midst of printing a batch of my BLACKWORK PATTERNS book and as I was collating the pages, a thought flickered thru my brain - why not try a blackwork pattern for the background? Oooooh, that was intriguing....
so I stopped and picked out a pattern to try on ol' Santa. Here's how it turned out: 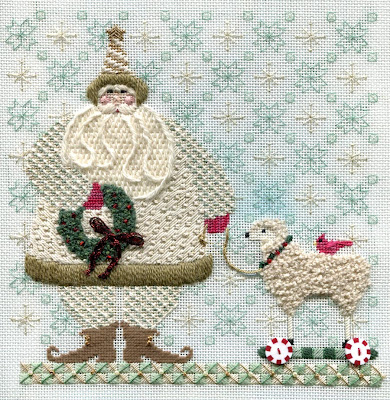 I think I like it. It's so different... maybe it's too distracting, but still, I like it. I used one ply of a pale seafoam green DMC floss (which the scanner goobered up a bit) and the ecru snowflakes are done with a soft Hi-lights thread.

But, you know, I really do like it. At the very least, when I look at it now, I'll be reminded to use more blackwork patterns in my future pieces. 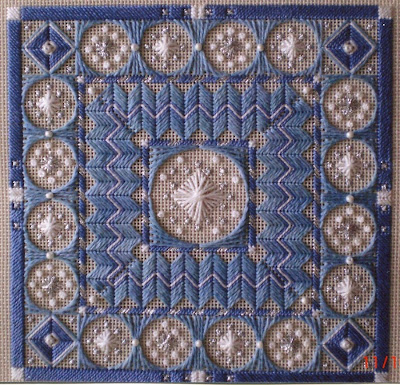 Last week I got the nicest card from Anne Ward in Leicester, England. She wrote to tell me that although she's been a cross stitcher all her life, she's recently started doing counted canvaswork and is having a wonderful time working on canvas.

She kindly sent me a packet of photos showing some of her finished pieces, and I thought I'd share them with you.

Along with stitching several floral collages in my SECRET GARDEN COLLECTION, Anne has enjoyed stitching up the "freebie" charts I've posted on my website. Here are some of her pieces...

This is the small WILD GEESE design that Anne has stitched with Watercolours "Mediterranean". I love those blues, don't you? And I especially like the way she turned the acorns in each corner, too: 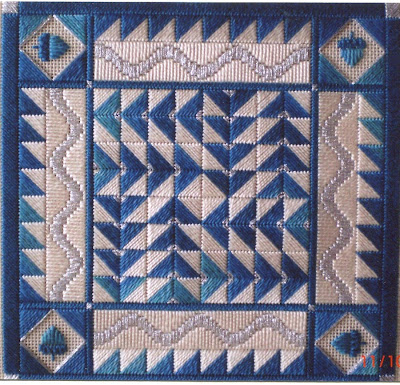 Anne has also stitched my series of freebie seasonal abstract designs (I love her wintry blue version of Winter Winds at the top of this post), picking out her own colors, and sometimes finishing them as padded box tops, like this Autumn Haze design (stitched in Caron silk Waterlilies, Sheharazade): 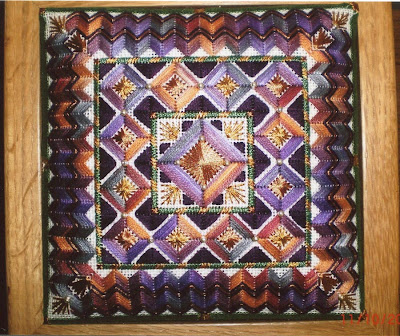 And here's another box top Anne stitched with silks, adapting part of the Autumn Haze design to fit on top of a beautiful oblong wooden box: 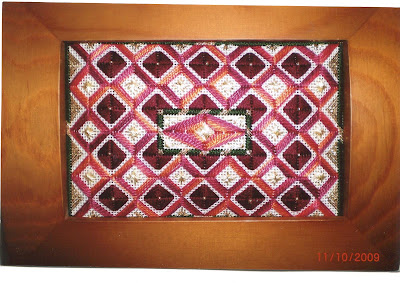 And here's a bit of blackwork disguised in a Springtime Square, that Anne has stitched with Anchor pearl cottons: 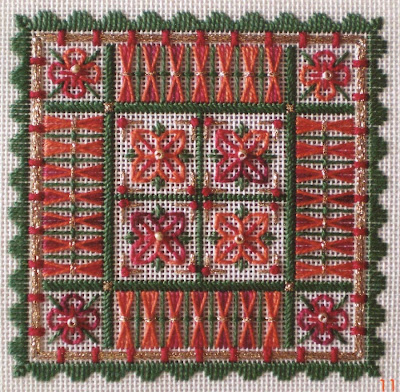 In her card, Anne says, "My husband says I'm addicted to your designs and Caron threads. True!" Well, Anne, tell your husband that there are a LOT of us stitchers addicted to threads and stitching and personally, I think it's really a wonderful addiction to have!

Thank you, Anne, for taking the time to share your pieces with me and all my blog readers. Your work is truly inspiring.... Happy Stitching, Everyone!
Posted by Laura at 6:02 AM 4 comments: