Bringing Out those Old W.I.Ps

To prepare for my stitching retreat last weekend, I was determined to work on old projects, and NOT start anything new (much as I would have liked to start a new one)... So I went rummaging around in my various stashes to find some old projects to bring and hopefully get more stitching done on them. (Can you relate to that impulse??) 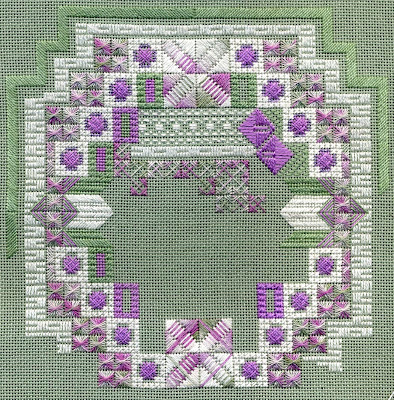 I came across an old Diane Evans' Something Different canvaswork design called MARGARET that I started several years ago. I LOVE Diane's designs and hope to get more of them stitched eventually....
but for now my goal is to get a little bit more done on this one. (And yes, I have made some changes as I stitched - what else is new, huh? - so mine's a bit more symetrical than Diane's original design. I've also added the green outer border. I confess I must have a severe orderly border compulsion...I just can't resist putting borders on all my stuff. What can I say? It's a designer thing....sigh)

What I love about stitching Diane's pieces are how truly inventive her stitch combinations are. She's such a creative designer! Just when you think you understand the pattern, she throws something totally unexpected into the design and you think, "How in the world did she come up with that variation?" 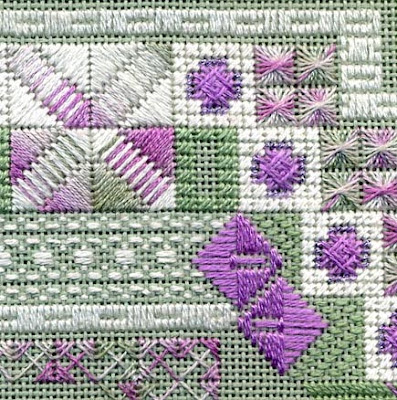 Here's a close-up of a section of this design:
It's stitched on 24 ct. Congress Cloth (I chose the pale green canvas, as well as the green and orchid color combo) with 1-2 strands of silk and very fine metallics. As you can see, there are lots of clever patterns that could be used in other situations on other canvases....plenty of stitching inspiration here!

I'm particularly intrigued by the large rice stitches at the lower left of the detail photo. There are sets of four large covered rice stitches that leave the inner arm alone (to be covered with a metallic thread later) and create such an interesting lacy pattern in the middle of the design.

Hmmm...I really don't have much to finish on this project...I wonder how long it will take me to complete it?....
Posted by Laura at 9:25 AM