I mentioned in my last Prairie Schooler posting that I was hoping to get the next row of Santas done in the "12 Days of Christmas" series. Well, TA DA - I met my goal and finished the row this week! And here it is (please ignore the scanner blip):

It was so fun to work on the parrots (for the "four calling birds") because it called for bright green and turquoise, for a change! 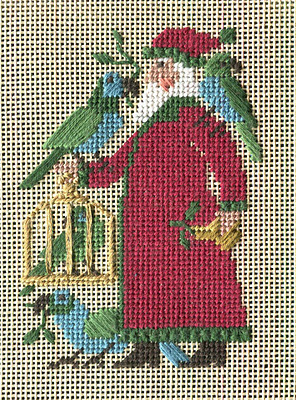 Then it was also fun to do the "six geese a-laying" with Canada Geese - one of my favorite birds! 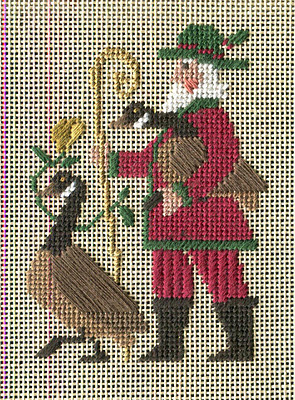 But really, the "five golden rings" block was a total blast to stitch! The PS designer who thought up the golden hoops idea was totally brilliant, don't you think? And after stitching the little black dog, I decided to personalize it a bit to make it look like my half-pointer dog, Katie. I delicately added a bit of white on the dog's legs, neck and belly (to suggest Katie's feathery legs and tummy) so now it looks like this: 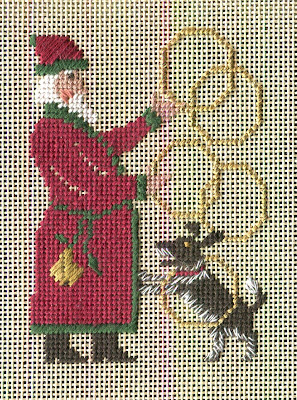 It tickles me no end to look at it, since it suits her playful personality -- she's ALWAYS ready to play fetch with just about anything, and I know this is JUST the way she'd greet Santa! Anyway, I've started the next row of Santas, but I'm not sure if I'm going to have the focus to continue much further....

It's time to get back to a whole bunch of new projects I'm designing for spring. They're hanging on my grid-wall, half-started and ready to pick up again and finish.... Sigh, I may have to leave the ol' Santa project for next Christmas to get finished.... but you never know -- ho, ho, ho!
Posted by Laura at 7:47 AM

I love that you are needlepointing these! I want to do them too, JUST LIKE YOURS! anychance you would be interested in provinding "rough" stitch guides? Just what stitch you used where? No, graphs, just name of stitch and where? I will pay nicely for them!!! please? I love your work and designs, so talented! As an accountant I struggle with thinking outside the "rules" (HA!). Think about it! please...

Your Santa's are really nice, and I like the way you stitched them. Good coloring too. Great job again!
Susan

oooh, looking lovely. I have just started this today as a SAL with Linda and Debbie.